The Rock Smelter is a Special weapon introduced in the 21.3.0 update.

The Rock Smelter is a weapon added in the 21.3 update. It has a limited range, decent damage, high fire rate, average mobility and high capacity. Also this weapon can be obtainable by buying the Mining Season battle pass.

It looks like a industrial themed double flamethrower held by the player's torso. Each flamethrower contains an ammunition supply. In the front of the flamethrower it has a blue colored screen that shows several numbers when reloading. It appears to be a remodel (somehow) of the Hitman Exoskeleton.

This weapon has fixed delay, which means that when you switch to this weapon, you will get a pull out animation of approximately 0.3 seconds. It has Burning effect which means that when you are hitting any target it will take small damage for some seconds. The killing time is around 2.5 or 3 seconds without modules. A part of the damage is reflected back thanks to the Barrier attribute.

When reloading, the player shakes the both flamethrower fast. 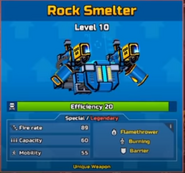 The Rock Smelter viewed in the Armory

Rock Smelter in use on Lost World map