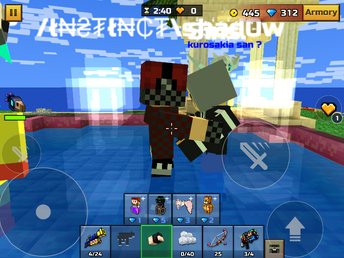 Sandbox Dating is a controversial phenomenon (similar to Three Category Spamming) that occurs very frequently in Sandbox mode, where two players chat with each other and reenact in-real-life dating in the game. It occurs almost everywhere in the mode in question, but mainly in private matches. It is still unknown why this happens a lot, as Pixel Gun 3D is often played by kids, and dating in sandbox mode is neither appropriate nor acceptable (due to the hazards that these activities entail, which is quite self-explanatory). Sandbox Dating usually is inappropriate, however, daters do not get banned. Before the introduction of Sandbox, multiple daters used private, or even public matches, especially Heaven Garden, to date. Sandbox was most likely introduced to keep daters to that mode only.