The Smart Bullet Bazooka, commonly abbreviated as the "SBB", was a Heavy weapon introduced in the 10.6.0 update.

It is a gray rocket launcher that shoots homing missiles, which are missiles that follow the player. It has high damage (per shot), medium rate of fire, low capacity, and average mobility.

As the name suggests, it is a bazooka. It has many elements from the Super Mario franchise, such as the Bullet Bill that appears in Mario.

The player holds this weapon with both hands, one of them grabbing the brown handle from the bottom of the gun. The player shoots a rocket with a face on it and a low bullet travel time. The rocket follows the player since it has the homing missile attribute and leaves a smokey trail. When hitting a player, it leaves an orange, fiery blast radius.

When reloading, the player takes out the large box from the back of the gun and replaces it with a spare one.

Bring a scoped weapon to take out targets from afar, as the rockets are slow to travel to the target.

This weapon was undoubtedly one of the most popular weapons in the game. When accessible to many players (like in the Armory at a cost that many players can afford), many players would want to buy it back then, mainly in the older updates, when its power was at its prime. It is often loved and wanted by many players and was known to be a classic weapon in this game, but it was also hated due to its sheer power and popularity. The developers removed this weapon from the game entirely as a result, due to the excessive complaints and the performance of homing missiles.

It was nerfed. The speed of the rockets or "smart bullets" was slightly reduced, making it easier to out-run the rockets.

It was entirely removed from the game.

In the 15.2.0 update, it was removed from the game completely due to community feedback urging for its removal (mainly because of its homing missile attribute). Any player that has bought it previously will be issued a full refund. The Judge, Swarmer, Bee Swarm Spell, Nanobots Rifle, and the Resurrection were removed as well. 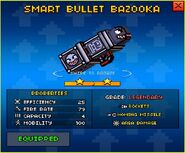 The stats of the Smart Bullet Bazooka.