This article describes a Pixel Gun 3D weapon. If you're looking for the same weapon in Pixel Gun World, see Sniper Rifle (PGW).

The Sniper Rifle is a default weapon located in the Sniper section.

It is a simple, wooden sniper rifle that shoots regular bullets. It has a 10x scope. It deals low damage for lower levels, however, it has a low firing rate, expected from a sniper weapon. It is best to replace this weapon as fast as you can since it isn't very effective on players with good armor.

It is almost entirely comprised of brown wood, with a wood gun base and shoulder stock. It also includes a metal barrel and scope. Its bolt is on its left side of the gun instead of its right side, which is quite rare among sniper rifles.

This weapon shoots regular bullets with instant bullet travel time. It has a 10x scope that allows this weapon to perform better in a long range.

When reloading, the player takes out the clip from the bottom of this weapon and replaces it with another. It gives delay to some weapons associated with the Three Category Spam like the Thunderer and Reflector (Weapon).

The player should come equipped with a close-medium range primary and secondary firearm, as the sniper rifle can take a long time to reload, leaving the player exposed to attacks both from snipers and players attacking from behind. If the player were to run out of ammo during a battle, it's advised to carefully approach opponents with a powerful weapon, as some enemies are equipped with very powerful sniper rifles, and can down you easily if you cannot respond. 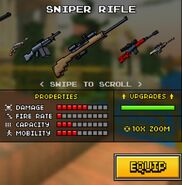 The Sniper Rifle in the old shop.

The Sniper Rifle in use.

The 10X scope of the Sniper Rifle. 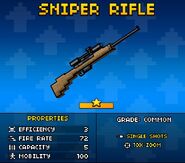