Obtained through the Event chests

This article describes a Pixel Gun 3D weapon. If you're looking for the same weapon in Pixel Gun World, see Steam Power (PGW).

It is a steampunk shotgun that shoots a spread of bullets. It has medium lethality, a high rate of fire, decent capacity, and decent mobility. This weapon does not feature a scope, making it difficult for long-range shooting.

It is almost identical to its predecessor, but all the bronze and gold turned into black. It has a triple barrel setup. This weapon is based on the real world Chiappa Triple Threat. The design goes along with the Steam Revolver.

Like any other shotgun, this weapon shoots a spread of regular bullets with instant bullet travel time and it can perform best at close range since it is a shotgun. The bullets are shot at a high fire rate. It has no other attributes.

When reloading, the player opens the barrels and ejects the used shells. A new group of bullets is inserted and the barrels are closed. It has no delay mechanics.

Have a weapon with a longer range.

The Deadly Candy, which was the original base version of the current Steam Power. It was replaced by the current Steam Power in the 8.0.0 update. It had a triple-barrel setup, with a candy cane pattern on each barrel. The base and handle are lime green. A small patch of white can be seen under the base. When you reload, the gun opens in half and you put three sorts of candies as ammo in the gun. 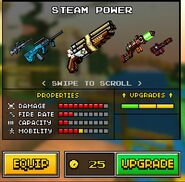 The Steam Power in use.