The Stinger is a Heavy weapon introduced in the 9.4.0 update.

It is a military rocket launcher that shoots rockets that can be manually guided by the player. It deals good damage at a decent firing rate with a decent capacity and decent mobility.

This weapon launches rockets with a steamy trail that follow the user's crosshair and the center-dot when aiming down the scope. So, the rockets in this weapon certainly have a bullet travel time and this weapon has a 4x scope, allowing longer ranged battles. When landing into a wall or a player, they leave an explosion.

When reloading, the clip is taken out and is replaced by a spare one. It has no delay mechanics.

Bring a Sniper weapon to fend off enemies in long range combat.

Initial release as a rentable weapon (Android only).

It was then removed from the Lucky Chest.

Its efficiency was buffed from 25 to 34.

The Stinger in use.

The 4X scope of the Stinger. 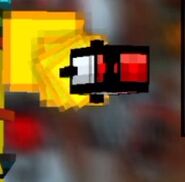 The missile of the Stinger.