The Thunder Storm is a Sniper weapon introduced in the 17.2.0 update. It is part of the Ancient Master Event Set.

The Thunder Storm depicts an ancient oriental/magical themed sniper weapon, partnered with good damage, a good fire rate, decent capacity, and a low mobility. It is also joined with an instant fire rate and a useful chain damage attribute.

It takes on the resemblance of an ancient embroidered scroll, with a golden dragon entwined around a purple rod. Next to the rod is a cracked tablet with a thunderstorm illustration and an golden encrusted edge. It shows its age with a section missing from it. When the player holds it, lightning particles will levitate upon the hand, kind of like a scope.

On the right hand, the player wields some form of energy and they hold this weapon (the scroll) on their left hand. This weapon shoots a pink thunderbolt that has instant bullet travel time. It also possesses a 4x zoom optic sight, which is a blue floating scope. Moreover, the bolt can slow down the target and do chain damage to them, which means deal the same damage to an opponent that is nearby the affected opponent.

When reloading, the player inserts energy from their right hand to this weapon. It has no delay mechanics.

This weapon pairs well with an automatic sighted Primary to finish off enemies, and a high damaging Heavy weapon to defend yourself when running out of ammo or needing to reload. 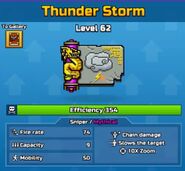 The Thunder Storm in the Armory.