The Tooth of Fate is a Backup weapon introduced in the 21.3.0 update and obtainable from the Trader's Van.

The Tooth of Fate is a Mythical Backup weapon from the Chosen by Crystal Trader's Van introduced in the 21.3.0 update. It is capable of dealing excellent damage, along with a relatively fast fire rate, and moderate capacity and mobility. This weapon also possesses travel time and the ability to active a Super Punch

similar to the Demon Catcher.

It takes the appearance of a dinosaur fossil but as a weapon with multiple neon green crystal shards powering it, with the largest crystal placed in the interior of the fossil and appears outside of the jaw. It has a reddish brown handle and several bone-like details on the bottom. It's design is very similar to the Ritual Rifle.

When the fire button is held by the player, the Tooth of Fate recoils back several times and emits neon green bullets or green crystal bullets, damaging targets when projectiles come in contact with them.

This weapon has Fixed Delay, meaning there will be short pull-out animation lasting around half a second everything a player switches to this. 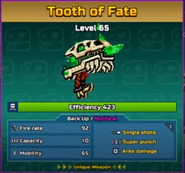 The Tooth of Fate in game