Obtained from level 6 of the Black Market

Can be obtained through a maxed out black market.

6 (for Clan and Black Market)

The Treasurer is a Primary weapon released in the 17.6.0 update. It can be obtained from the Black Market.

The Treasurer is a multicolored-themed assault rifle that can be obtained from the Black Market. It has very high damage, a good fire rate, a good capacity, and very high mobility.

It appears to look like a mixture combination of a shotgun and a rifle, while the shotgun being the stock and the rifle being the rest. It has a mixture of colors being magenta, yellow, turquoise, gray, brown, and purple. It also comes with an optic and an under-barrel grenade launcher for cosmetics. It has a laser underneath similar to the one on Neutron Pulsator that does not move with the weapon.

When the fire button is held, the weapon will fire an excessive amount of empty shells at full-auto. These bullets are hitscan and will deal random effects

to enemies. Moreover, this weapon has an optic sight that allows fighting in long-range along with X-ray Vision

. It gives the killed enemy a chance to drop a coin. 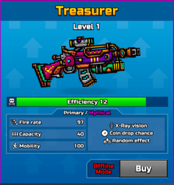