The Tunnel Riveter is a Backup weapon introduced in the 21.3.0 update.

It looks similar to the Candy Revolver, but with a construction theme thrown in.

. When it's 10 bullet magazine depletes, the player ejects it and inserts a fresh one. 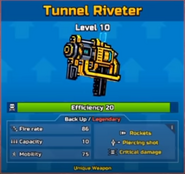 Tunnel Riveter in the Armory