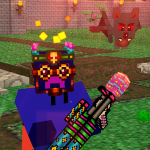 Hello {{{l<insert name here>}}} and welcome to my page. I'm an active editor and I'm also an admin here and on our conception wiki. I do my best to keep as many pages as I can up to date and accurate. I also have an extremely small channel on Youtube: Ender Creeper14. I'm currently inactive on my channel due to Apple shutting down Air Shou, the recording software I used. If you have any favours or questions, comments, or concerns, please don't hesitate to message me and I'll message back as soon as I can. I'm pretty active, so it shouldn't take me any longer than a day to reply. I'm on at least once a day unless I'm sick and unable to use any of my devices. Have a nice day ;)

Me In The Homescreen Of PG3D

I play on my iPad Mini

Hellraiser Up2, Automatic Peacemaker Up2, Last Kiss Up2, or Brave Patriot Up2.

Prototype Up2, Magic Bow Up2, or One Shot

Easter Bazooka Up2, Wizard Wand Up2

Level 6 Bat, his name is Conrad

I have a section on my page dedicated to my favourite weapons.

My History In PG3D

I have been playing PG since November 14, 2013, it costed $1.02 to download and it was called "Pixel Gun 3D PRO Minecraft Ed.". To be honest, I don't officially remember how I found out about PG. I think I either saw it on YouTube or like others, I searched up "Minecraft shooting games". I somehow manage to reach level 27, which was the max level at the time in PG. Then my Samsung Tablet broke and I lost all my stuff. Eventually, I got an iPad Mini and I downloaded PG again. I accepted the fact that I lost my data and started working from scratch. My original name before Ender Creeper14, was Mystic Ninja. Up until my level was around the late 20's, I decided I wanted to change my name to something else. I roamed around for a username and at the time, I also wanted to make a YouTube channel. I was looking for a username that involved "Creeper" in it, a lot of the usernames were taken and I didn't want to be a copy-cat. I eventually came up with "Ender Creeper" and because it was August 14, That's how my YouTube and PG username, "Ender Creeper14", was born. I've seen a lot of eras in PG, From the Anti-Gravity Blaster era, to the Storm Hammer, and even the Dragon Breath era. Eventually, I searched up "Pixel Gun 3D Wiki" and this very wiki popped up. I made an account and I read A LOT of the gun pages. For a little while, I was shy and fearful of editing an pages. Eventually, I started editing and now I believe I've became a nice edition to the PG Wiki. I hope you enjoyed my story of my journey that led me to where I am today.

Other Apps I Play

My Least Favourite Weapons, Gadgets, Pets, And Types Of Players

A Little About Me

-My favourite colours are:

-I tend to like the girly weapons of PG, I will admit that. Despite the looks, they can surprisingly do work.

-My first edit on the wiki was on the former Pets page. (The page was removed, due to the Pets having their own separate pages and are organized in a category).

-When talking about the Ghost Lantern in the past, I used to spell lantern, "lattern".

-Despite me being very active here and online in general, I do participate in sports and active activities in real life.

-When I first became a Rollback, I accidentally roll backed my userpage, removing everything. It took me an hour to repair and reverse my mistake. Lol.

- My first minigame I ever played here was I'll sue ya!!!

(Obviously, I’m not going to state EVERYTHING about myself IRL, but I will state what I am comfortable with).

- That’s as much as I’m comfortable mentioning here, if I were to admit more, it would be too personal.

My View On Pixel Gun

I've been playing Pixel Gun for over 4 years. I've seen this game evolved from a simple Minecraft-style FPS, to a futuristic, OP weapon, spam-a-licious game. I was around when this game ran at 30 FPS and the graphics were "special" to me. Most people would say that the graphic back then were bad, but I personally liked them. Now, the game runs at 60 FPS, and the graphics and weapon designs have improve. I remember back in the day, armour wasn't a thing, and MOST weapons required skill. I remember when the Anti-Gravity Baster was the "Ghost Lantern" of 5.4. I remember it was OP, and armour wasn't a thing, at the time RiliSoft wasn't known for nerfing weapons. Instead of nerfing it, they buffed the armour. As time went on, armour became stronger, and the Anti-Gravity Blaster was eventually forgotten. As time went on, classic weapons like the Automatic Peacekeeper, Steam Power (known as the Deadly Candy back then), Hitman Pistol (formerly called the Killer Mushroom), and other weapons were forgotten in time. Sadly, a lot of these weapons are still good to this day all 3 of those weapons, and most other classic weapons can still get kills. It's a shame that these weapons are over-shadowed by weapons like the Judge, Minigun Shotgun. Golden Friend, and many others. One of the only classic guns that I see used on a daily basis, is the Prototype. Especially up in the max level bracket, there's honestly a lack of variety. This is why veteran players that have been around for at least 3 years are quitting, this is why the last of the OG players, like me (no bragging intended) are becoming more and more rare. Veteran players are getting bored of the game. For me, I still play like I would play like a year or 2 ago. I tend not to use OP weapons, I like to use weapons that require skill to use. The only weapons that I use that may seem OP, are the Prototype, and the Easter Bazooka, but even them, those weapons require at least some skill to use. The Prototype, you obviously have to have good accuracy, I have rather decent accuracy, personally, I have to say. And the Easter Bazooka has like no blast radius, whatsoever. I mean, it does have an area of effect, but it's very small and can usually only kill 2 players AT MOST at a time. The rest of my class, I like to run with weapons like the Hellraiser, and the Last Kiss. They do work, but they don't do enough damage to be OP. I would personally consider both of them, above average. I personally dislike annoying, noob-ish, and OP weapons. Weapons like the Judge, Smart Bullet Bazooka, Ghost Lantern/Soul Stone, and Nanobots Rifle. They don't require that much skill and are spammed way too often in my opinion. I guess, one could say that the Judge requires skill. But how would you feel if you went up against a whole team, or nearly a whole team, using nothing but the Judge and 1-shotting you and your teammates for days. I don't know about you, but I've been in that scenario before, and it's not fun. I want to go up against players who favour skill over no-skill. Sure, I'm annoyed a bit, but if you used skill to kill me, then you've earned that kill. That brings me to another thing. I hate the Resurrection. They ruin good kills, and it's not fair IMO. I hate when I come in clutch, but it turns out, the little dirt bag was revived by the Resurrection, then ends up 1-shotting me with the Ghost Lantern/Soulstone. That never fails to grind my gears. I personally miss the "golden age" of PG, when the game was at it's peak. Now, it's gone downhill. I will admit that the game is getting better, but it will never be the same. I'm not saying that change is a bad thing, if anything, it's a good thing, but the way this game has evolved... is a story of its own.

So, to make a long story short, I'm a veteran player who still prefers skill over OP stuff.

One thing I'd like for you to let linger in your mind, I'm just one player, one user who's been playing the game for a long time. I'm just one player who's been in the evolution of this game and have had experiences. I'm just one player who has a still-continuing story to tell. I'm just one player who has their own opinion. We all have our own stories that have value. Whether you're a fellow veteran PG player, retired, or you're a new player, or have quit, we all have our story to tell, our legacies to lead, and we all shall eventually meet our happily ever after. I'm only one person with his own story, legacy, and values, and in order to grown and contribute, we all should listen to what others have to say. You never know THEIR story, and they may never know YOUR story, unless we share. Every person's views matter.

If you need to contact me beyond my Message Wall, you may reach me on either Twitter, Instagram, or Discord. I may also post from time to time, but I mainly use them for contacting purposes.

Instagram: @endercreeper14 (Haven't started posting yet, I do respond to messages)

Now, I want to know your feed back, if you can, please answer the questions in the polls below. There are a few questions to summarize my whole profile, but if can take some time and give honest answers, I'd very much appreciate it.

Alright, I'm done messing around lol. Thank you for reading and for answering the polls. If there's anyway I may improve my profile, please message me on my Message Wall. I'm also up for some suggestions, compliments, criticism, ETC. Just remember that the rules, as always, still apply. Tell me your favourite weapons, tell me what you favour about Pixel Gun. I'm always up to listen and engage with players and users in our community have to say. I hope you enjoyed my profile, and I wish you the best of luck. ^_^

Retrieved from "https://pixelgun.fandom.com/wiki/User:Ender_Creeper14?oldid=259019"
Community content is available under CC-BY-SA unless otherwise noted.