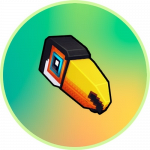 Welcome to my Profile Page

Hi {{{l<insert name here>}}}, Galli here. I am the Pixel Gun Wiki Founder, which means that this fabulous website is the consequence of a crazy idea by me and the Wiki Co-Founder, Coriidor5!

If you want to ask me any question about how the site works, my thoughts about the game, leave a suggestion for the wiki, collab or just say hi feel free to contact me on my message wall or:

Everything started in a cold and boring December afternoon... You know, Pixel Gun 3D wasn't really that popular in 2013. There was nothing special in it. When I downloaded it earlier in the Summer I was pretty much convinced by its similarities with Minecraft, a game that was a hit at the time (and still famous today of course) and that I really fell in love with. Other than playing the well-known Mojang game, I started downloading on my iPad many mockup apps that reminded me of that blocky artstyle that I enjoyed so much. There were so many, and Pixel Gun 3D Block World Pocket Survival Shooter was one of them.

However, soon I realized that the small zombie shooter game had potential. Updates kept adding new features: not only new weapons or skins, but brand new and varied game modes. And this is what I love about the game even today: there seems to be no limit to its growth.

The reason why I decided to create a Wiki about it is actually quite simple: I wanted to record the game's growth and keep track of everything. The Pixel Gun 3D Updates page was one of the first I ever created. Weapons pages followed, and then enemies, and them maps.

The fact is, I never expected the game to be supported for this long. And most surprisingly, I never expected to found a community of editors. As I said before, the game wasn't popular at all, and creating an encyclopedia was just a way to have fun, probably as a solo editor. My expectations changed when I realized, to my surprise, that a Pixel Gun Wiki was already there. It was founded some days earlier, and after leaving a message to the founder, I started doing what seemed obvious: create pages, upload pictures, edit. It wasn't a new thing to me, I had already contributed to many wikis before.

Soon another member joined that Wiki: Coriidor5 and we started working hard together. I was so excited! Finally I wasn't alone anymore in the wiki. You may ask: what about the founder you previously mentioned? Well... he never answered my message. Sadly, he was inactive. After a while Coriidor and I realized that we couldn't continue like that: we couldn't manage a site as simple editors. I proposed to create a brand new Wiki, one that was ours and we could really expand without the fear of wasting our time. We didn't know if we were good enough. We didn't know if new people would join. We didn't know if it would last or not. But we dediced to do it. Coriidor accepted, and after moving everything from the old wiki to the new one, our journey began. Mine, Coriidor's and yours.

After all these years of experience, I consider myself a quite skilled player.

I don't have particular preferences regarding weapons types, I just like to use all of them (maybe Sniper weapons are used by me slighlty more often, since I like to practise my aiming skills).

Talking about my general play style, I consider myself a "classic" or "retro" type of player. You aren't going to see me jump around and explode everywhere. I just want to have fun. I particularly dislike op weapons and techniques, like Three Category Spam, and I use Rocket Jumps only to reach high locations; I consider rocket spamming a quite unfair and annoying method. Melee weapons are pretty great; however, I miss the old days where very close range weapons like swords were the only available. I still remember those intense but satisfying sword duels in Knife Party!

I would be pleased to share with you my personal weapon setup or the weapons that I use the most, but unfortunately, thanks to the terrible upgrade system (I hope it gets changed asap), I am forced to buy new stuff very often and replace those guns that become obsolete as I level up. Keeping them revelant isn't an option for me due to the unacceptable prices. As a result, I simply cannot use what I like.

My main character is the same that I used in Minecraft years ago (except for some edits and corrections that I made in the last few years). As far as I know, it isn't based on any videogame or movie. Yes, I'm not completely sure because it wasn't actually made by me, but I downloaded it from a random Minecraft skins website. Ironic, right? Even though I didn't create it (and it's kinda edgy lol), it's been around for so long that I've become attached to it. If you like it as much as I do, you can steal it on of those sites that download Minecraft skins (type my username). Anyway, these are the skins that I use in the game:

Pixel Gun World was a wonderful idea by the developers. And I have absolutely no idea why they cancelled everything. The game was an opportunity to expand the Pixel Gun universe and reach levels of quality and gameplay simply not possible on the mobile version. What can I say, it was different, and it was fun until it lasted. I can only hope that a PC version of Pixel Gun will return in the future.

Since the early days of the Wiki I started focusing on the design of the site. I have always believed that it's insanely important, not only because it looks good and makes visiting the site a more pleasing experience, but it's also somehow a sign of quality and reliability.

As you are about to verify by yourself, at the beginning I was really bad. Like seriously. I used garbage programs and photo editors, just to get the job done as soon as possible. I consider myself quite obsessed with holiday and festive themes. Through time I started putting more effort in designing themed logos and art for the wiki in general, and now I'm satisfied with the stuff I make.

Using Photoshop to create these kind of things has quite become a hobby for me and often I design icons and logos to make my documents look cooler. I'm nowhere near professional photo editors; however, as I just said, it's fine for me since it's just for fun and, who knows, it might come in handy as well in the future.

I kept some of my works in a folder in my PC and I'd like to share it with you, so you can see everything in just one place. Looking at some of the awful works I made in the past makes me cringe so bad (lol), but please just consider it as an opportunity to see how my discrete abilities and the Pixel Gun Wiki evolved through the years.

Retrieved from "https://pixelgun.fandom.com/wiki/User:Galli2001?oldid=302626"
Community content is available under CC-BY-SA unless otherwise noted.