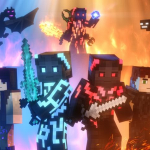 I am constantly joining lots of random clans so I'm not gonna tell you.

I DONT USE PETS THEY SUCK

Hello {{{l<insert name here>}}}! My name is Great Killa OE .I am a normal PG3D player who has above-average skill and has decent aim. I don't really know how to make an entertaining profile page, but this is the best that I can do. Feel free to read ahead!

A FEW FACTS ABOUT ME

HOW I STARTED PLAYING PG3D

There was one time when I met a friend of mine and saw him playing a game called "Minecraft PE"on his ipad. I thought it looked fun to play so I wanted to download it on my own iPad. But when I searched "Minecraft PE", I found out that it needed money to download. I was disappionted, because I didn't have any money and couldn't download it. I scrolled down the list of related applications, hoping to see a free version of Minecraft, and I found a game that looked similar to Minecraft called Block city wars. I downloaded it and found out although it wasn't entirely like minecraft, it was still fun to play. It was pixelated like minecraft and you could buy cars and guns and all sorts of things. It also had many modes. Block City Wars became the first game I played, and was one of the games that I liked most. One day I saw a special offer in BCW, saying that if I downloaded "Pixel Gun 3D" I could get some BCW currencies. I downloaded PG3D immediatly, and found it was like BCW, so I started playing PG3D too. Slowly the BCW devs became inactive, and there weren't many updates, so lots of people quit BCW. I thought BCW was not interesting anymore, so I became a full time PG3D player.

I started playing PG3D in the 10.0.0 update. Back at that time when Impulse Sniper Rifle was the best sniper and could 2 shot. At that time my best weapon was Heavy Shocker (I was crap and didn't even know it was a short range weapon LOL), and I only played Team Fight and Flag/Point capture (I was too scared to go to Co-Op, Deathmatch and Duels, cuz I was just a kid back then. Stupid me eh?) I watched free ads and got lots of coins and gems. One day the game rented me Stinger and it was a 2 shot. I thought it was OP and got it for 85 gems. I got Anti-Hero Rifle at Lvl 15. I used them till Lvl 22, where I changed stinger to Laser Minigun. I was a Heavy Spammer for a long time (Trash me), and rarely used other weapons. At higher levels there were many pro players and I was crap, so I quit PG3D for some time.

I didn't exactly remember when, but when I came back to PG3D, there were craft weapons, and I got rekt by champion weapons. Third Eye was a 1 shot at that time. Luckily I bought Piranha, and it could kill with 3-4 rockets (Very OP considering its a multiple shot weapon), so I became a strong player, until I reached Lvl 32. Piranha became a 2 burst kill(12 rockets), and was trash, so I had to buy Stakegun, Military Grenade Launcher,and Good Doctor. I was barely able to fight the pro players with Future Police Rifle and Supercharged Rifle, so I quit again. It was at the start of the Phoenix season battle pass. This time, for 10 months.

I came back (Again) during the Operation SNOW Battle Pass. One only needed 3000 battle crowns to get to lvl 30 back then (100 per level, unlike today's Battle Pass, where you needed 100 for lvl 1-10, 150 for lvl 10-20, and 200 for lvl 20-30), and I completed the pass, so I got Night Hunter. It was very OP back then, like today's Storm Trooper Exo. Then, during the Magic Season Battle Pass, my PG3D somehow overloaded and crashed every time I try to play online modes, so I had to quit for a third time.

I rejoined PG3D in the beginning of the Chess Season. I got 2300 Battle Credits in the Operation SNOW season, so after a liittle grinding I bought the Gold Pass. I have played from that time to present, and became a kinda good player. (I'm not actually a pro compared to other players on this Wiki, I'm just above-average).

Somehow I like math a lot. I love doing sports, especially football. I also like playing with LEGO TECHNIC products.

I LOVE MINECRAFT ANIMATIONS!!! Especially those made by Black Plasma Studios. I really want to learn how to animate, though I still haven't started learning it.

I am usually friendly to people if they mean no harm.

I am still trying to 3 cat spam, although I suck at it.

Thanks for reading my profile!

Retrieved from "https://pixelgun.fandom.com/wiki/User:Great_Killa_OE?oldid=347604"
Community content is available under CC-BY-SA unless otherwise noted.