This article describes a weapon, for the Battle Pass season see the: Vikings Season.

The Viking is a Primary weapon introduced in the 15.2.0 update. It is obtainable during the Phoenix Season Battle Pass.

It is also available through the Time Traveler Event Set, along with the Gladiator, and Cursed Pirate.

It is a Viking themed weapon with the form of an axe and the performance of a shotgun. It deals very high damage especially at close ranges (2 shots are able to take down a max-armored player, including the Bleeding attribute). It also has a decent fire rate, somewhat low capacity and mediocre mobility.

It appears to be a pump-action shotgun with an L-shaped pump to make it look like a Dane Axe head. Another L-is on top of the "axe blade". The L on the inside is a mixture of orange and yellow. The back is brown, with what appears to be a red ribbon tied onto it. The trigger is about one-third of the way to the front from the back.

This weapon has a grey-orange-brown color scheme.

Like any other shotgun weapon, it shoots multiple pellets with a spread at once. The bullets are regular and have instant bullet travel time (hit-scan). When it shoots, purplish smoke flows out of the barrel, similar to the Steam Power and the Ultimatum. Moreover, its range is generally longer than most shotguns and can perform decently at long-range. Its fire rate is decent and is more of an intermediate between a shotgun with a fast fire rate (for example, Undertaker with a fire rate of 80) and another with a low fire rate (Ultimatum with a fire rate of 42). To add, it has an armor bonus, giving the user extra armor to survive and a bleeding effect which makes the opponent(s) temporarily lose some health.

When reloading, the player pushes a few shotgun rounds, one by one, into the bottom of the gun. This reload animation is similar to the Mega Destroyer and the Shotgun.

It gives delay on some weapons that are associated with Three Category Spam like the Thunderer and the Reflector. It also receives a delay if those weapons were shot, then quickly switched to this weapon.

This weapon is undoubtedly very popular among Pixel Gun 3D players. In fact, by demand, this is one of the most wanted weapons in the game, next to the Ultimatum. This weapon is loved by most players, but at the same time, others dislike it, usually either due to its performance or the fact that it's popular.

In the social media of the game, including the Pixel Gun 3D Facebook and Pixel Gun 3D Discord, some players requested this weapon somehow returning to the game. So, in December 2019, this weapon was returned a couple of times in the Trader's Van with a Christmas skin.

However, as of the 21.2.3 update, it seems that this shotgun was not used very often due to its Nerf of a shotgun rework.

Judging from its name, "Viking" means any of the Scandinavian seafaring pirates and traders who raided and settled in many parts of north-western Europe in the 8th–11th centuries. Given that it is a weapon that is part of the Time Traveler set, it makes sense, because it does look like a weapon that a Viking would use, but rather only as a melee weapon. 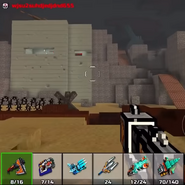 The Viking in use.