The Water Blades is a Backup weapon introduced in the 17.2.0 update.

It is a Chinese New Year weapon with an elemental theme of water. It has a decent fire rate of 85, an above-average mobility, and a medium capacity, it deals high damage, it is a 2 shot to the head and a 2 shot to the body with bleeding, otherwise it will be a 3 shot body.

The Water Blades takes the appearance of (ironically) an Egyptian khopesh and a blue scroll with the Chinese word for ‘water’ (水). It shoots projectiles made of water which make your opponent bleed.

When the fire button is pressed, the user will cast a water projectile from the blade. The projectile has travel time, and will heal teammates or deal the bleeding effect depending on the target.

When reloading, the user will replenish the power of the blade by summoning water droplets from the scroll.

This weapon is very powerful when used on other players. It is mostly a 2-3 shot, and bleeding effect is great for finishing the enemy off. This weapon is especially good in close range due to its long travel time. Try to be very close to your enemy as it will be easier to hit your opponent. 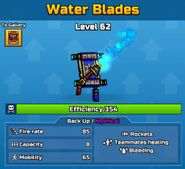 The Water blades in the Armory. 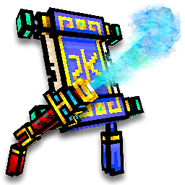